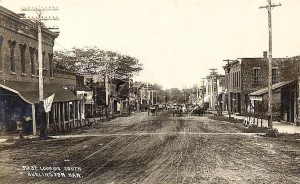 Knowledge of the past historical development of an area is often important to understanding its future. Factors which influence growth or change may extend their affects for decades. Buildings may change their purposes over periods of time as the type and intensity of uses vary. Their location, however, most often becomes a focal point to attract further growth. Almost like the natural features of an area, transportation routes when once laid out have a sense of permanency that endures for generations. For example, the location of one-third of the streets and highways in the nation were laid out before the automobile was even invented.

The following account of the formation and development of Burlington was prepared by deriving information from the Burlington, Kansas, Centennial, September 30, October 1, 2, and 3 of 1957.

The first conception of Burlington was in 1842, when part of the present site of Burlington was granted to an Indian. The Burlington Town Company was organized in Lawrence in the fall of 1856 by C. W. Babcock and B.W. Woodward. The town was named in honor of the City of Burlington, Vermont. In 1857, the townsite was selected and people were designated to occupy and hold the townsite. Two houses were moved from Hampden across the river to Burlington and were combined to form Burlington’s first house. Burlington was organized as a village in 1859 and as a third class city in 1870, with F. A. Atherly elected its first Mayor. The early business section was located on North Third Street.

The first county seat of county government was established in LeRoy in 1857 and was moved many times between Burlington, LeRoy and Hampden. Burlington became county seat in 1865. A few of the “firsts” experienced by Burlington were: a) first steam sawmill in the county in the spring of 1857; b) first child born May 1858; c) first agricultural fair was held in 1860, d) first sewing machine arrived with the dentist’s wife in 1868; e) first ordinance in the United States to ban smoking of cigarettes (Burlington had three cigar factories at the time – there was no ban on cigars.); f) Burlington Volunteer Militia formed in 1863; Burlington’s Company C, 137 Infantry, 35th Division mobilized August 5, 1917. 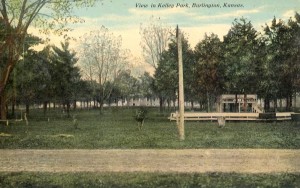 Burlington is located on Highway 75, the longest north-south highway in the United States at that time and was served by a branch of the Sante Fe and the Katy Railroad. Passenger transportation was largely provided by private car, and a bus passed through Burlington on its way to Topeka. The Sante Fe, carrying freight cars and a coach, ran through Gridley and back to Ottawa on Monday, Wednesday and Friday. The Katy sent a freight daily, but no passenger service was offered. Truck lines also serviced Burlington.

The Neosho River has been the major influence on the history of Burlington from fur trading to flour milling, to farming in its fertile valley basin, to electrical power generating, to providing city water source. For many years the City of Burlington made claim and was known as the “Catfish Capitol of the World” because of the large size and number of catfish caught in the Neosho River near the city.

The construction of the John Redmond Reservoir northwest of the city from 1960 to 1965 for flood control of the Neosho River Valley has had a major impact on changing the community from a solely agricultural community to a city looking for industrial development.

Today we owe those sturdy pioneers and their sons and daughters a debt of gratitude. It was these daring, grim and uncouth frontiersmen who “broke the trail” and “blazed the way” to noble civilization. To them we owe the privileges we enjoy.

Today, the City of Burlington is a second class city with a population approaching three thousand residents. Burlington has taken into consideration that preservation and recognition of historic, architectural, archeological and cultural resources should be part of the planning process and growth of the city.

The City of Burlington has a lot to offer to residents of all ages and to new industry.
The following slogan for Burlington was adopted during Pioneer Days and then made a reality by the many accomplishments of the City: